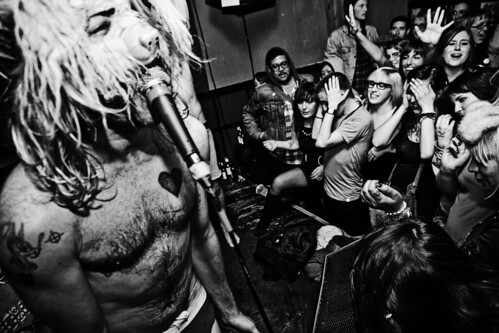 Unexpurgated text of a NOBUNNY (!) interview that will be in Ghettoblaster Magazine any moment now….

Tell us a little bit about the new (La La La La Love You) 7″ on Suicide Squeeze?

David, who runs Suicide Squeeze, asked me to do a 7″ for him over two years ago and for better or worse it took me about that long to hand in the tracks. I work at my own pace. One of the great things about being a musician is that I don’t have a boss, I don’t have to answer to anyone or meet deadlines.  So anyway, ya, I finally got it handed in. The artwork is by the great Japanese artist/illustrator Riko (aka Helmet Underground). The songs I’d like to think “speak for themselves”. Those who have expectations of what Nobunny sounds like will probably enjoy the a-side. The b-side is an exclusive track to this 7″ for those ears attached to open minds.

Goner also just released the Maximum Rock N’ Roll EP for this year’s Record Store Day. Talk a little about that album and what made you decide to release it this year?

The songs are a mix of old and new. I was hesitant to release it on Record Store Day cuz I am not one to jump on trend wagons and am not a record collector myself. I do however like records and do like record stores and was happy to do another record with Goner. Releasing a “raw punk” record after the slightly more polished First Blood was not a calculated move but still I can’t help always wanting to fuck with people’s expectations. Keeping things interesting and fun for myself. First Blood was recorded on an 8-track with an sm58 microphone. Hardly a big budget hi-fi production, but it is a bit smoother than other stuff I’ve done.

When I listen to “First Blood” or the “La La La La Love You” 7″, I hear these constantly expanding sonics and songwriting palettes (like the T. Rex homage and string instruments on “Breathe” or the b-side of “La La La…”)- do you ever worry about losing the subtlety of some of these new songs in live performance? Or do you think about retiring the Nobunny live entity in favor of just recording?

I have never worried about how songs will work live when I write or record. Those are all seperate exercises that come together when reality dictates. Listening to a record is a completely different experiance than seeing a performance. You listen with your ears. A live show is for the ears and the eyes. Playing songs exactly as they are on a record is boring to me. I’m always looking for the best way to work the moment. With movement. Be it live or recorded. Nobunny will live forever. Maybe not always as a screaming telegram, but this is art without an expiration or any expectations.

Nobunny live is like this collective exercise in totally sincere and unselfconscious performance art on the part of both audience and performer; how can just a cheapo rabbit mask and some raw rock n’ roll tap into this hidden need on the audience’s part to go absolutely crazy?

Never underestimate the power of the mask and the smell of teen spirit. I was born to perform. I come from a family of musicians and entertainers. It’s in my blood. A zebra can’t change its stripes. Pranking till my last pump.

You play most, if not all, the instruments on your albums – which makes it even more interesting to listen to the musical changes from album to album – what was it that made you initially want to do it all yourself?

Nobunny has always been a one-man-band collective. I record must of the stuff by myself because I can. It’s a bit of an ego trip, but also a productive way to spend time alone. I have and do record with other people, but I imagine I’ll always work alone too as I am a loner. It’s hard for me to teach people the songs in my head. I hate having to correct people and ask them to do something over. Plus the recording process is often a creative one. Songs change and come to me as they are being recorded. S’hard to explain that to someone while in the moment.

Was there a particular song or musician that made you realize you wanted to dedicate your life to music?

All of ’em! I’ve always wanted to be here doing this. I love music and hits, bands n’ b-sides, session musicians and producers, band mythology and tech talk. Everything about the music and beyond. I am a fan of the arts in general and I always want more.

As a discerning rock n’roll fan yourself, do you ever see pictures of yourself in full flight live and think, “Yeah, cool, I would have loved this when I was a teenager?”

If you don’t like what you are doing, how can you expect anyone else to? I make music that I wanna hear, and put on the show that I’d like to see. I live the life I love and I love the life I live.

Are oldies still where it’s at for you when you’re listening to records for enjoyment and inspiration? Do you still get out to shows a lot?

Ya, I love oldies, but to be fair I listen to music from every decade from the ’40s on up to now. I enjoy plenty of modern bands. I do go to shows, but nowhere near as much as I used to. I tour quite a bit and see shows almost every night. When I’m off tour I tend to stay home.

You’ve been busy lately on the new release front. What’s next?